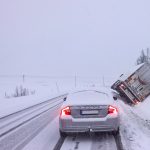 WHAT DOES EASTERN ATLANTIC DO IF I HAVE AN ACCIDENT?